The cost of the weekend workshops includes entry to all the festival's recitals over the Saturday and Sunday. Check ticket options for individual day tickets.
Workshop Tickets
Download Itinerary 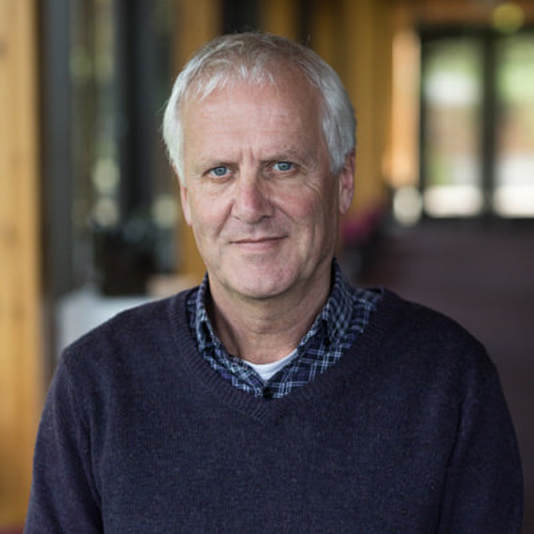 We are very proud to welcome Richard Wright to SNGF for the first time. Richard will be giving the advanced solo class where his knowledge and rigour will stretch and challenge the most experienced player.

Since graduating from the Royal Northern College of Music, Richard has pursued a highly varied career in both classical and popular music. His performing career has encompassed everything from contemporary music groups such as the London Sinfonietta to film and TV sessions and membership of the critically acclaimed rock group Latin Quarter, best known for their 1985 hit Radio Africa. He has worked with musicians as diverse as composer John Adams, guitarist John Williams, English folk roots star Christine Collister and Zimbabwe’s legendary Bhundu Boys – and has appeared everywhere from New York’s Lincoln Centre to the Glastonbury Festival.

Above all, Richard is an internationally recognised teacher of the classical guitar and its pedagogy, with a special interest in the problems of early learning. He designed and delivered a teacher training course for guitarists in Venezuela on behalf of the Proyecto Cultural Mavesa and has lectured on guitar pedagogy in the UK, Holland, Germany and the USA. He led the classical guitar team for A Common Approach 2002, the Federation of Music Services’ national curriculum project for instrumental and vocal teachers. In 2004 Richard became the Yehudi Menuhin School’s first teacher of guitar.

In his capacity as a guitar consultant for ABRSM, Richard helped develop the Music Medals scheme and the current guitar syllabus. He co-edited with Peter Batchelar the supporting publications for the syllabus, including the Scarlatti and Weiss albums and the two volumes of Time Pieces. In addition he co-wrote, with Alan Bullard, the guitar version of Joining the Dots, Bullard’s highly innovative series of sight-reading books. Richard’s groundbreaking edition for guitar of Bach’s Cello Suites I–IV was published by Cadenza Music in 2008. He has taught some of the finest players of the new generation including Laura Snowden, Declan Zapala and Kevin Loh. 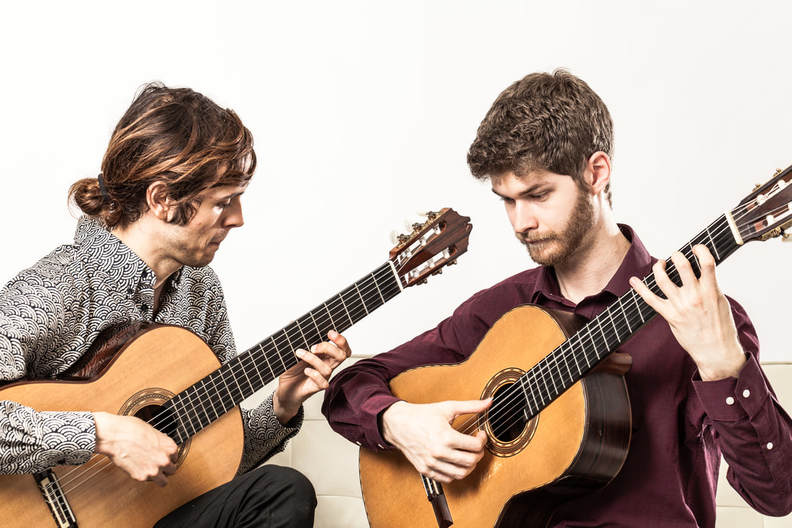 Vickers Bovey Guitar Duo have been described as 'performers with truly uncanny unanimity' (Ivan Hewett, Daily Telegraph) and 'astounding exquisiteness' (Paul Driver, Sunday Times). Julian and Dan first met studying at Birmingham Conservatoire where they both received First Class Honours and the Principals Prize, continuing their studies with a joint Masters at the Royal Academy of Music, London, graduating with Distinction in their Performance Diploma in July 2016.

Winners of multiple awards, the duo have recently been selected for the Worshipful Company of Musicians Maisie Lewis Prize, the Tillett Trust Young Artist Platform, which saw them make their Wigmore Hall debut in February 2017, the 2017 Park Lane Group concert series at St Johns Smith Square and the Concordia Foundation Young Artist Scheme. In 2016 they won the Royal Academy of Musics Club Prize, the most prestigious competition at the Academy and are prize winners at the 2017 Guitar Foundation of Americas International Ensemble Competition in Los Angeles and the 2018 International Festival de Guitarra Braga Ensemble Competition in Portugal. The Vickers Bovey Duo will be coaching duos and soloists. 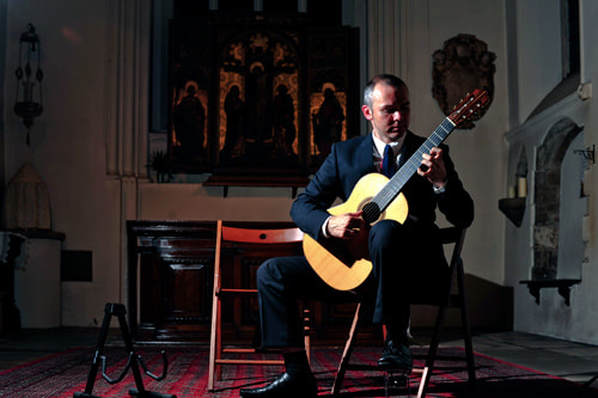 Festival Director Francesco Mariani is tutor of Guitar at the Purcell School for Young Musicians. He studied at the Leeds College of Music and the RNCM with Graham Wade and Gordon Crosskey and subsequently with Richard Wright. His students have gone on to study at the RNCM, Trinity, Guildhall and San Francisco Conservatoires and have had success in national guitar competitions. He performs solo and in ensemble with Mezzo-Soprano Gina Fergione and has commissioned works by composers Bryn Harrison and Ewan Stefani. 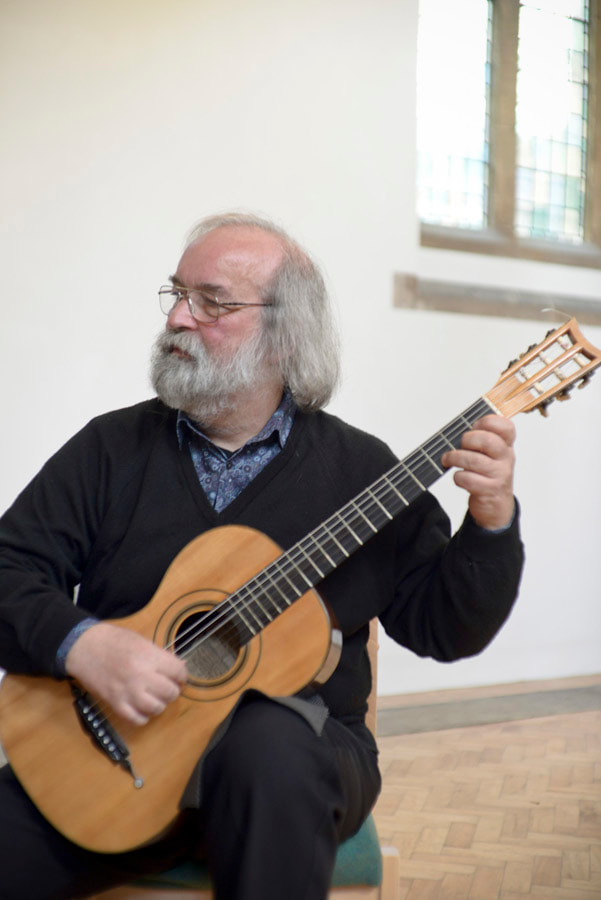 Chris Susans has played on BBC radio and television and given guitar and lute recitals throughout Britain. As well as his solo performances he has also played with ensembles including song accompaniment, chamber works with various instrumentalists and works for choir and guitar, and in orchestral concerts as concerto soloist. He is also a member of the New Omega Players directed by Gilbert Biberian.

He was a regular tutor at the Scottish International Guitar Festival and was Deputy Director of the Cambridge Guitar Summer School for 11 years. His special interest in ensemble for guitar has led to being the founding Musical Director for the National Youth Guitar Ensemble.
​
As a composer he has contributed music to many educational publications including some published by the Associated Board.
As a lutenist he is a member of the Vallet Lute Quartet and is a member of the Lachrimae Consort playing lute and cittern. 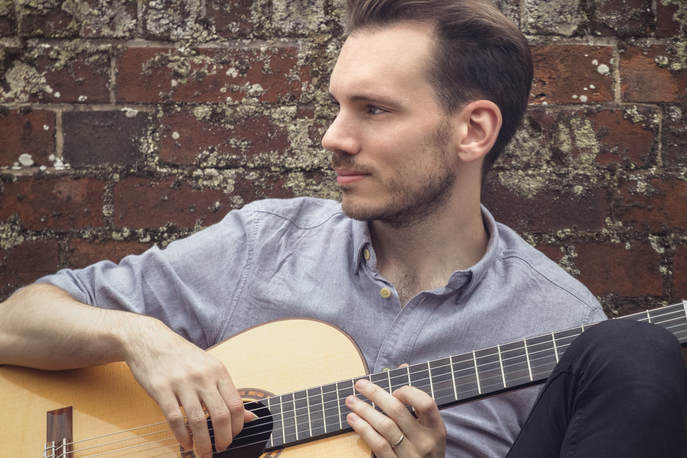 David began studies with David Burden at his local music centre in Hertfordshire. In 2006 he was the strings finalist in the BBC Young Musician of the Year competition, performing Rodrigo's Fantasia para un gentilhombre live on BBC Two from the Sage Gateshead.

He went on to study at the Royal Academy of Music with Michael Lewin, where he graduated with distinction in 2010 and furthered his studies with an MMus in 2012. During this time he continued to perform guitar recitals at venues such as Wigmore Hall, Purcell Room, Sage Gateshead, Kings Place, St Martin in the Fields, and expanded his musical experience in chamber music and orchestral playing, taking up instruments such as mandolin and banjo in orchestral, music theatre and operatic music from Mozart and Respighi to John Adams and Peter Maxwell Davies. In 2009 he met flautist Emily Andrews and founded the Andrews Massey Duo (www.andrewsmasseyduo.com), with whom he has released three acclaimed CDs and toured extensively. Their video of Davids arrangement of Schuberts Standchen has over 60,000 views on YouTube (making it one of the most watched flute and guitar videos).